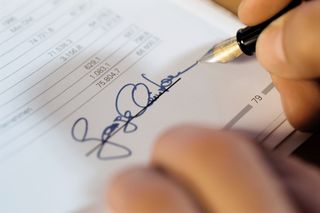 A jumbo sized battle in a high profile and seemingly never-ending estate matter highlights what may appear to be a minor detail in estate planning but what is in fact an important consideration: the executor fee.

According to a recent Wall Street Journal article, "Battle Involving Leona Helmsley Estate Spotlights Issue of Executor Pay," the New York attorney general has challenged the proposed fee on the estate of real estate mogul Leona Helmsley. The $100 million sought by the executors, including two of Helmsley's grandchildren, is "astronomical" and should be reduced by 90%, the state Attorney General Eric Schneiderman said.

An issue in this case is that the will does not specify how the executor fees should be calculated, while ruling out the use of a fee schedule in state law, according to the attorney general's filing.

Many wills don't mention executor fees, and state law then determines the fee. Many states base the fee (also called a "commission" in some states) on a sliding percentage of the assets of the estate. In New York, the commission starts at 5% of the first $100,000 and declines to 2% on amounts above $5 million. So in New York, the total fee on a $1 million estate would be $34,000, or 3.4%. There are variations in every state, but the average on an estate of that size is typically about $30,000, or 3%.

Many states allow for extraordinary fees for especially complex estates or estates involved in litigation. States also are different in which assets are included in calculating the executor fee. Some states say only that executor fees must be reasonable, subject to court review. In those states, you should detail fee arrangements to help avoid legal battles later.
In states with fee scales, individuals may cap the fee in their wills at an amount below the amount allowed by statute. Others will provide for payment to an estate planning attorney as executor based on their hourly rate, if they think the cost will be lower than the state's asset-based scale.

In the Helmsley case, the executor fee calculated using the state schedule would have been a $200 million. The $100 million requested by the executors was equivalent to $6,437 an hour based on records of how much time the executors spent working on the estate.

Compensation for executors who are friends or family usually isn't a big deal when the families aren't uber wealthy—particularly when the executors are also beneficiaries. Typically the executors will waive a fee because paying tax on the fee at ordinary-income rates wouldn't be good if instead they receive the money as a bequest tax-free.

If you are asked to serve as someone's executor, be proactive and ask what directions the will contains with regard to executor fees. Being an executor is a time-consuming and complex task, regardless of the size of the estate. There is a lot of responsibility, and the potential for problems, including being sued, is very real.

For additional information on wills and roles of executors in Houston, please click here to visit my website.