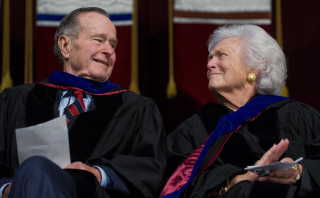 Their lives were devoted to family and public service, and to each other. The passing of George H.W. Bush and his wife gave many Americans pause to consider their leadership and their devotion.

Few were surprised when George H.W. Bush passed less than eight months after Barbara’s death. Their deep connection—from his service in World War II to the Presidency and their role in public service after leaving the White House—was evident to everyone around them, says Forbes in the article, “Valuable Estate Lessons From The Passing Of George And Barbara Bush.”

The death of a longtime married couple in quick succession, is often called “broken-heart syndrome” or “widowhood effect.” The thought is that the lives of two people are so entwined they can’t bear to be without each other. The time between the Bushes’ deaths also raises practical questions in estate planning. Timing is critical in an estate plan, and if the deaths of married spouses happen within a short period of time, it can make the administration of an estate more difficult.

Although the passing of long-time married spouses in close succession is not uncommon, the way in which the estate will be handled is based on the time between the two deaths and the details of their estate plan. In many instances, trusts or wills have survivorship provisions that require a spouse to survive for a specified period of time. If a spouse dies within a certain period—such as two weeks—they may be designated as having predeceased the other spouse and that may have implications under the document. Therefore, rather than having to probate the two estates successively, the estate administration is made into a simpler process.

The senior Bushes, however, wouldn’t have been aided by such a provision, because nearly eight months had passed. However, solid strong estate planning can help in a long-term marriage of older spouses to have the estate flow a certain way.

One thing President Bush might have used is a qualified disclaimer. With this, a beneficiary makes an irrevocable election to refuse to receive an interest in the property. This can be an effective tool, when a surviving spouse doesn’t need those assets.

When spouses die within a short period of time of each other, there may be difficulties with beneficiary designations. Most spouses leave their retirement plans to the surviving spouse and their children as contingent beneficiaries. However, when death occurs in quick succession, the second spouse to die may not have yet rolled the first’s retirement account into their own account with beneficiaries. That can cause issues. This can mean having no beneficiary and the retirement account winds up going to the estate of the first spouse. When this occurs, there’s probate and no chance to stretch out retirement distributions.

In situations like the Bushes, where the surviving spouse doesn’t need the funds, it might be smart for the couple to rework their beneficiary planning to pass over the spouse and distribute immediately to the children in an inherited IRA.

The romantic nature of spouses, who literally cannot live without each other, is very touching. However, there are estate planning implications that must be addressed. An experienced estate planning attorney will be able to explain how the timing of one spouse’s death impacts the other, and how to prepare their estate, in case this should happen.