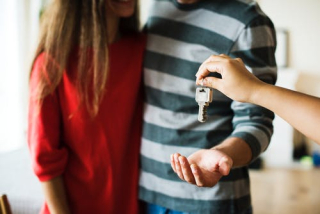 How home ownership is titled, or how it is described on the title to the house, can have far reaching implications that may not come into play for decades.

Deciding how the owners of a home will hold title to it, is a much bigger decision than most people think, says The Washington Post in a recent article, “What you need to know about holding title to a home with a loved one.” Before you sit down at the closing table to finalize the purchase of a home, or if the house is being re-titled to align with an estate plan, it’s important to understand the different ways that a home can be owned with another person.

There are three primary ways to title property between spouses. Joint tenancy is the least common and typically must include the language “with right of survivorship and not as tenants in common.” Spouses typically acquire title as “tenants by the entireties,” which only applies to spouses in a limited number of states.

When a couple acquires a home before marriage, in some states, a premarital joint tenancy automatically becomes tenants by the entireties, when they marry. However, the drawback to joint tenancy, is that it’s possible for one spouse’s interest to be alienated by deed or by a judgment lien or bankruptcy. In some states, a joint tenancy can be partitioned, so that the ownership can be separated.

A surviving spouse doesn’t have to do anything upon the death of a spouse, depending on how they held title to their home. Ask your estate planning attorney about any changes to the title of the property, to be certain that title is set up this way.

There are many ways married couples or those in a civil union can hold title to a home. Joint tenancy with rights of survivorship again gives each owner the ability to own the entirety of the home upon the death of the co-owner. This transfer is automatic and doesn’t require any paperwork or legal processing.

Tenancy by the entireties gives the couple the same survivorship rights as a joint tenancy deed, but it also affords the couple certain protections against some creditors. It provides that debts entered into by one of the spouses, shouldn’t cause the loss of the home.

The third form of ownership is to hold title as tenants in common. Here, each owner has a specific percentage ownership interest in the home. When a co-owner dies, that person's share goes to the person designated in the will or by the laws in the state where the property’s located.

A home can also be owned through the use of various estate planning trusts, such as revocable trusts or living trusts for one of the spouses or even part ownership of the home among the two trusts. This can become complicated and there are tax implications, so it would be best to speak with a Houston estate planning attorney to determine which would be the best way to own the home, in the short and long term.

Reference: The Washington Post (April 15, 2019) “What you need to know about holding title to a home with a loved one”